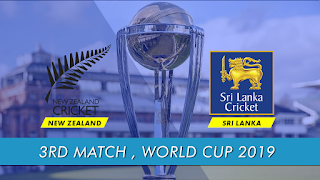 New Zealand became the winner of third match of ICC World Cup 2019. Sri Lanka performed batting first and scored 136 runs. They could make more as New Zealand’s high-performance team made them all out in 29.2 overs.

New Zealand completed the target in a very impressive way as they scored 137 runs in 16.1 overs and not even a single wicket lost at all.

In terms of wickets remaining, it was the winner’s ninth biggest victory in One- day internationals, second biggest against Sri Lanka and the third biggest in the World Cups.

The unbeaten partnership between Martin Guptill and Colin Munro completed the target as Guptill scored 73 off 51 balls with 8- fours and 2- sixes and Munro scored 58 off 47 including 6- fours and a six.

Matt Henry became Man of the match his excellent statistics of picking up 3 wickets in 7 overs for only 27 runs.