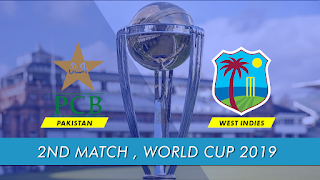 West Indies Vs Pakistan: The 2nd Match of the Cricket World Cup 2019

In the second match of the cricket world cup 2019, West Indies secured an amazing victory against Pakistan.
The West Indies were left with 218 balls spare as they completed the target in 13.4 overs. Pakistan team made a total of 105 runs. Fakhar Zaman scored 22 runs, Babar Azam also scored 22, Wahab Riaz scored 18 and Mohammad Hafeez secured 16 runs in his name.
West Indies completed the target with only 3 wickets lost. Chris Gayle became the top scorer as the player made 50 runs off 34 balls that includes 6- fours and 3- sixes.
Nicholas Pooran scored 34 runs off 19- balls including 4- fours and 2- sixes. The strike rate for Chris Gayle and Nicholas Pooran was 147.05 and 178.94 respectively.
For West Indies, Oshana Thomas took 4 wickets, Jason Holder picked 3, Andre Russel took 2 and Sheldon Cottrell took one.
For the Pakistani side, Mohammad Amir took 2 wickets by delivering 6 overs.
In terms of balls spare, it was West Indies’ sixth largest victory in ODIs, fourth biggest in World Cups, and second biggest against Pakistan in the ODIs.
Oshana Thomas was named the Man of the match for his magnificent bowling that claimed 4 wickets for 27 runs in 5.4 overs.