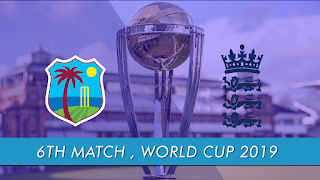 Third Match of ICC World Cup 2019: England vs. Pakistan on 3rd of June
The match between the host country England and Pakistan went very interesting at Trent Bridge, Nottingham. Centuries by Joe Root and Jos Buttler could not stop Pakistan from being the winner of this fixture.
England won the toss and decided to bowl first. Pakistan scored 348 runs of which Mohammad Hafeez scored 84 off 62 balls, Babar Azam scored 63 off 66 balls that includes 4- fours and one six, Sarfaraz Ahmed scored 55 runs off 44 balls with 5- fours included, Imam- Ul- Haq scored 44 off 58 balls, and Fakhar Zamsn scored 36 off 40 balls that includes 6- fours.
Three of the wickets of Pakistan were picked up by Moeen Ali and three were picked by Chris Woakes. Two wickets were picked by Mark Wood.
England also showed excellent batting with centuries by Joe Root and Jos Buttler. Joe Root scored 107 runs off 104 balls. This was his first ever World Cup century and 15th ODI century. The score from Root included 10- fours and a six. Jos Buttler scored 103 runs off 75 balls. It was his 9th ODI century. This included 9- fours and 2- sixes. The strike rate was 135.52. Jonny Bairstow made 32 off 31 balls that included 4- fours and one six. Chris Woakes scored 21 runs.
Three England wickets were taken by Wahab Riaz, two by Shadab Khan and another two by Mohammad Amir.
The Man of the match was Mohamaad Hafeez for scoring 84 runs off 62 balls with the strike rate 135. 48.
Match Highlights