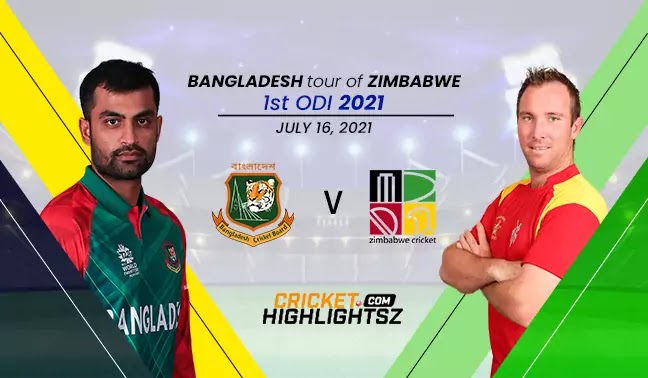 The first ODI between Bangladesh and Zimbabwe of Bangladesh tour of Zimbabwe 2021 was played at Harare Sports Club, Harare on Friday - 16 July 2021. Bangladesh has already won a test series by 1-0 against Zimbabwe played between July 7-11, 2021.
Zimbabwe won the toss and elected to bowl first in the 1st ODI of Bangladesh tour of Zimbabwe 2021.
Liton Das and Shakib Al Hasan shine as Bangladesh's massive 155-run victory over Zimbabwe in the 1st ODI played at Harare Sports Club.
Team Bangladesh scored 276 for 9-wickets down with a top score of an incredible century of 102 runs off 114 deliveries including 8-fours with a strike rate of 89.47 from Liton Das, 4th ODI century of his entire career and 3rd century against Zimbabwe in ODIs.
Afif Hossain blasted 45 runs off 35 balls including one-four and 2-sixes, Mahmudullah scored 33 runs off 52 balls including a six, Mehidy Hassan 26 runs, and 19 runs each from Shakib Al Hasan and Mohammad Mithun.
Ireland bowler Luke Jongwe claimed 3-wickets for 51 runs in 9 overs, Blessing Muzarabani and Richard Ngarava both took 2-wickets each and one for Tendai Chatara.
Zimbabwe scored 121 runs for all-out with a top score of 54 runs off 51 balls including 4-fours and 2-sixes from Regis Chakabva and also he scored his 2nd ODI half-centuries.
Skipper Brendan Taylor scored 24 runs off 31 balls including 3-fours, Dion Myers 14 runs off 24 deliveries, and Wesley Madhevere 9.
Bangladesh bowler Shakib Al Hasan claimed a 5-wickets haul for 30 runs in 9.5 overs, each one-wicket taken by Taskin Ahmed, Mohammad Saifuddin, and Shoriful Islam.
Shakib Al Hasan has topped the list of highest wicket-taker as a spinner with 274 wickets in 213 ODIs breaking a previous record of 269 wickets taken by Mashrafe Mortaza, 210 wickets in Tests, and 92 wickets in T20Is  also becomes the second-best bowling figure in ODIs of bowling history of Bangladesh Cricket Team.
Bangladesh has also registered a massive-run victory over Zimbabwe with 155 runs in the first ODI at Harare Sports Club.
Liton Das named Man of the Match for his incredible century of 102 runs off 114 deliveries including 8-fours with a strike rate of 89.47.
Match Highlights