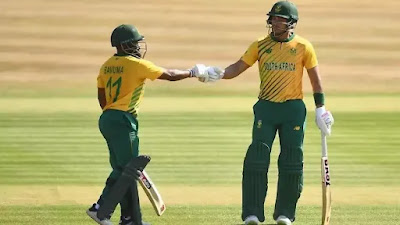 Bowler's attack before an amazing half-century from Temba Bavuma and Reeza Hendricks helped South Africa's record-breaking 49-run victory over Ireland and clinched a whitewash historic win of 3-T20I series over Ireland. This is also the first-ever whitewash victory over oppositions in a bilateral series in T20I cricket.

South Africa scored 189 runs for 2-wickets down with a top score of 72 runs off 51 deliveries including 6-fours and 20-sixes with a strike rate of 141.18 from skipper and opener Temba Bavuma.

Ireland bowler Simi Singh and Barry McCarthy took one wicket each for 27 runs and 40 runs respectively in 4 overs.

Ireland scored 140 runs for 9-wickets down in 20 overs while chasing with a top performance of 27 runs off 22-balls including 4-fours with a strike rate off 122.73 from skipper Andrew Balbirnie.

Temba Bavuma named Man of the Match for his career-best incredible knock of 72 runs off 51 deliveries including 6-fours and 20-sixes with a strike rate of 141.18.

David Miller named Man of the Series for his contribution of 139 runs including a half-century with an average of 46.33 in the 3-T20I series.
Match Highlights