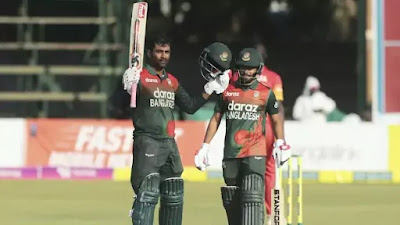 Zimbabwe scored 298-runs for all wickets down in 49.3 overs with a top score of 84 runs off 91-balls including 7-fours and a six with a strike rate of 92.31 from opener Regis Chakabva.

Bangladesh bowler Mohammad Saifuddin and Mustafizur Rahman both claimed a 3-wickets haul for 87-runs and 57 runs respectively, Mahmudullah took 2-wickets for 45 runs and Both Taskin Ahmed and Shakib Al Hasan took one wicket each.

Bangladesh chased 302 runs for 5-wickets down in 48 overs with a top score of stunning century of 112 runs off 97 deliveries including 8-fours and 3-sixes with a strike rate of 115.46 from skipper Tamim Iqbal. This was his fourteenth century in ODIs and recorded most centuries against Zimbabwe in ODIs. This is also his fastest century for Bangladesh in ODIs.

*Skipper Tamim Iqbal contributed 88 with Liton Das for the opening stand before adding 59 with all-rounder Shakib Al Hasan and 57 with Mohammad Mithun.

Zimbabwe bowler Wesley Madhevere and Donald Tiripano both claimed 2-wickets each for 45 runs and 61 runs respectively and Luke Jongwe's 1 for 44.

Tamim Iqbal named Man of the Match for his brilliant performance of claiming a remark of 14th century of 112 runs off 97 deliveries including 8-fours and 3-sixes with a strike rate of 115.46.

Shakib Al Hasan named Man of the Series for his incredible contribution of 115 runs and claimed 5-wickets in 2-match of 3-ODI series of Bangladesh tour of Zimbabwe 2021.
Match Highlights