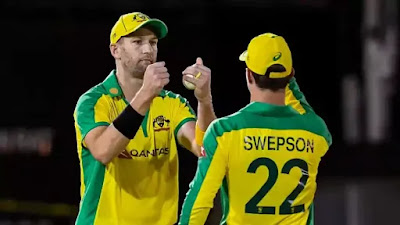 BAN vs AUS 4th T20I 2021 was played at Shere Bangla National Stadium, Dhaka on 06 Aug 2021. Bangladesh won the toss and elected to bat first against Australia in the fourth T20I of Australia tour of Bangladesh 2021.

Despite an economical spell from Mustafizur Rahman, the bowlers attacked before Dan Christian's attack and Ashton Agar's run-a-ball 27 guided Australia to a tight three-wicket victory against Bangladesh in a low-scoring game of the fourth T20I, reducing the series lead to 3-1.

Bangladesh scored 104 runs for 9-wickets down in 20 overs with a top score of 28 runs off 36-balls including 2-fours with a strike rate of 77.78 from Mohammad Naim.

Mustafizur Rahman's economy rate of 2.25 was his joint best in a whole T20 international tenure for Bangladesh.

Mitchell Swepson named Man of the Match after a fantastic bowling effort in which he took three wickets for 12 runs in four overs.