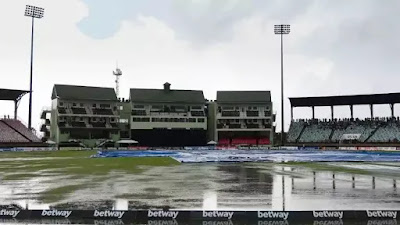 The third T20 international between West Indies and Pakistan was called off due to rain after West Indies scored 15 without losing a wicket in 1.2 overs. West Indies are 15 for 0 (Andre Fletcher 14* and Chris Gayle 1*).
Rain forced the umpires to call off the third T20I between West Indies and Pakistan at the Providence Stadium in Guyana after only six minutes of play. Two of the series' four matches have already been canceled, leaving only one game to be played.
Andre Fletcher found time to slam two sixes from the six balls he faced - one each from Mohammad Hafeez and Mohammad Wasim - in the eight deliveries that were available. Fletcher smacked Hafeez over the head with a long-on wallop before swinging Wasim over the bowler's head. That was the last delivery before the skies opened up once more.
The rain ceased almost an hour later, and the covers were removed soon after as the chances of a five-over shootout improved. However, with one portion of the pitch still wet, a 17-minute inspection prior to the cut-off time put an end to any chances of play. The five-match T20 tournament, which was initially scheduled, was canceled.