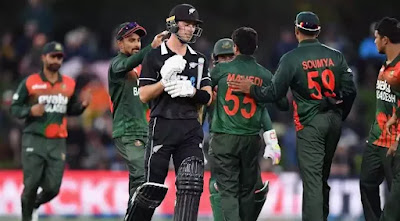 Nasum Ahmed and Mustafizur Rahman each took four wickets before Mahmudullah hit an incredible 43 to lead Bangladesh to a crushing six-wicket victory against New Zealand and an unassailable 3-1 lead in the fourth T20I.
Match Stats:
Will Young top-scored for New Zealand with 46 off 48 balls, hitting five fours and a six, while Tom Latham and Finn Allen added 21 and 12 respectively.
Nasum Ahmed (4-10), Mustafizur Rahman (4-wickets for 12-runs in 4-overs), Mohammad Saifuddin (2-wickets), and Mahedi Hasan (2-wickets) were the top bowlers for Bangladesh.
Bangladesh chased down 96-4 in 19.1 overs, with Mahmudullah top-scoring with an unbeaten 43 off 48 balls, including two sixes and a four, Mohammad Naim scoring 29 and Shakib Al Hasan scoring 8.
New Zealand best bowler Ajaz Patel grabbed two wickets and one for Cole McConchie.
Nasum Ahmed named Player of the Match for his outstanding economical bowling performance in which he took four wickets for ten runs in four overs, including two maidens, at an economy rate of 2.50.
Match Highlights