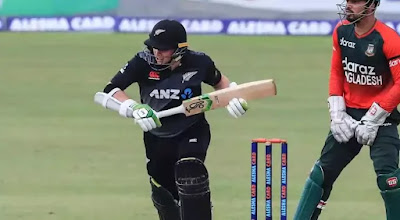 Despite a tough effort from Afif Hossain, Tom Latham's unbroken half-century and opener Allen Finn's attack before Bowlers, New Zealand cruised to a comfortable 27-run victory against Bangladesh in the fifth T20I, cutting the series deficit to 3-2.
Match Stats:
Tom Latham top-scored with 50 not out, Finn Allen blasted 41 off 24-balls with 4-fours and 3-sixes with a strike rate of 170.83, Henry Nicholls 20, Rachin Ravindra 17, and Cole McConchie 17 not out as New Zealand scored 161-5 in 20 overs.
Shoriful Islam, Bangladesh's top bowler, got two wickets, while Afif Hossain, Nasum Ahmed, and Taskin Ahmed each took one wicket.
Bangladesh scored 134-8 in 20 overs, with Afif Hossain top-scoring with an unbeaten 49 off 33 balls, including three sixes and two fours, and a strike rate of 148.48. Mohammad Naim and Mahmudullah each scored 23.
Ajaz Patel, New Zealand's finest bowler, and Scott Kuggeleijn both got two wickets, while Rachin Ravindra, Ben Sears, Jacob Duffy, and Cole McConchie each took one.
Tom Latham named Player of the Match after scoring an unbroken 50 off 37 balls, including two sixes and two fours at a strike rate of 135.13.
Match Highlights