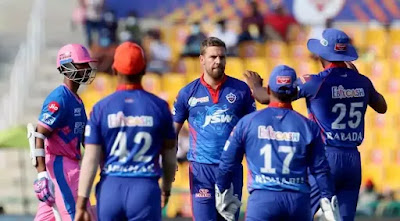 In the 36th match of the Indian Premier League, Shreyas Iyer's crucial 43 and Shimrom Hetmyer's assault before the bowler's attack guided Delhi Capitals to a comfortable 33-run victory against Rajasthan Royals and go to the top of the points table.


The Delhi Capitals' 33-run victory over Rajasthan Royals was their third-largest victory in the Indian Premier League in terms of runs remaining.

In the Indian Premier League, Rajasthan Royals' 121 was their second-lowest total against Delhi Capitals.

Mustafizur Rahman's finest bowler, Chetan Sakariya, both got two wickets for RR, and one for Rahul Tewatia - Kartik Tyagi.

Sanju Samson top-scored for RR with an undefeated 70 off 53 balls, including eight fours and a six, Mahipal Lomror 19, and Rahul Tewatia 9.


Shreyas Iyer named Player of the Match for his heroic 43 off 32 balls, which included two sixes and a four.
Match Highlights