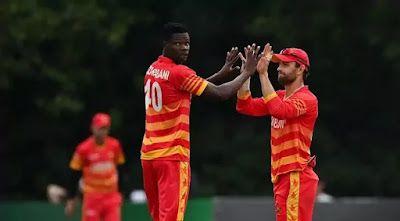 Muzarabani's four-for, Craig Ervine - Sikandar Raza's each half-century and Brendan Taylor's 49 before helped to Zimbabwe comprehensive 38-run victory over Ireland and take a 1-0 lead in the first ODI.
Match Stats:
Zimbabwe scored 266-7 in 50 overs, with Craig Ervine top-scoring with 64 off 96 balls, including seven boundaries, and Sikandar Raza unbeaten on 59.
Brendan Taylor made 49 from 45 balls, falling one run short of his half-century, with seven fours and a six. Sean Williams smashed four fours in his 33 off 57 balls, while Wessley Madhevere hit 19 and Luke Jongwe hit 18.
Ireland bowler Simi Singh, George Dockrell, Andy McBrine, Craig Young, Mark Adair, and Josh Little claimed each one-wicket.
Ireland were all out for 228 in 48.4 overs, with William Porterfield top-scoring with 75 from 110 balls, including 9 fours.
Harry Tector hit 50 off 55 balls with two sixes and a four, while Paul Stirling hit 32 off 47 balls with three fours and a six.
Zimbabwe's finest bowler Muzarabani grabbed 4-wickets for 29 runs in 9.4 overs, Wellington Masakadza and Sean Williams each got 2-wickets, while Wessley Madhevere - Luke Jongwe took one wicket.
Sikandar Raza named Player of the Match for his dazzling undefeated 59 runs off 44 balls, which included five fours and two sixes and a strike rate of 134.09.
Match Highlights