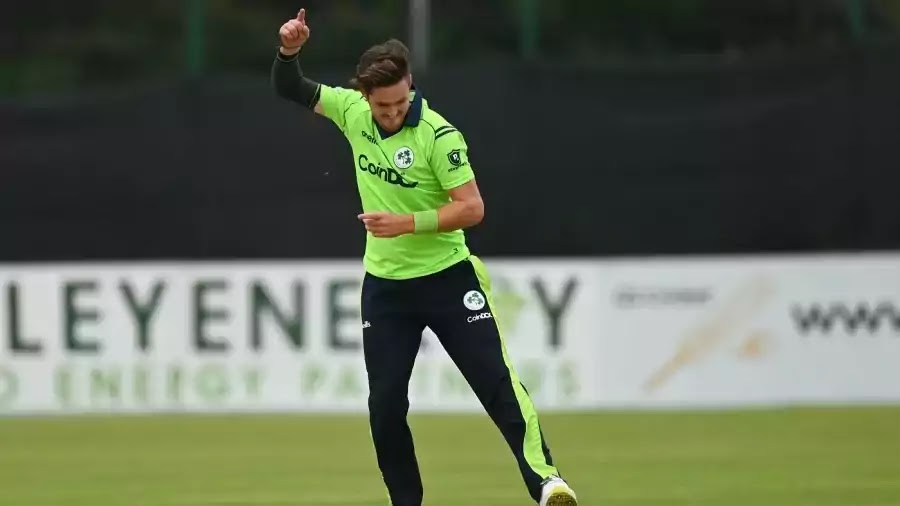 Mark Adair struck three times in the powerplay  Sportsfile via Getty Images
An 89-run opening stand between Paul Stirling and Kevin O'Brien, as well as Andy Balbirnie's 22-ball 36 before Mark Adair's four-for, led Ireland to a record 64-run win against Zimbabwe and an insurmountable 3-1 series advantage in the fourth T20I.
Match Stats:
Ireland scored 174-4 in 20 overs, with Kevin O'Brien leading the way with 47 off 39 balls, including six fours and a six.
Paul Stirling struck 39 off 33 balls with four fours, Andy Balbirnie hammered 36 off 22 balls with four fours and a six for a strike rate of 163.63, William McClintock made 15 not out, and George Dockrell scored 14 not out.
Zimbabwe bowler Wellington Masakadza claimed  2-wickets and one for Richard Ngarava - Luke Jongwe.
Craig Ervine (28), Luke Jongwe (24 not out), and Regis Chakabva (11) all contributed to Zimbabwe's 110 -9 in 20 overs.
Mark Adair (4-23), Shane Getkate (2-wickets), Simi Singh (1-wicket), Craig Young (1-wicket), and Barry McCarthy (1-wicket) were the top bowlers for Ireland.
Mark Adair was named Player of the Match after delivering a career-best 4-wicket haul for 23 runs in four overs.