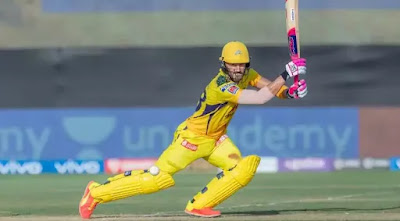 Rapid knocks by Faf du Plessis, Ruturaj Gaikwad, and Ravindr Jadeja lead Chennai Super Kings to a last-ball dramatic two-wicket victory against Kolkata Knight Riders and moved them to the top of the points table in the 38th match of the Indian Premier League.

The 171 scored by Kolkata Knight Riders against Chennai Super Kings was their eighth-best in the Indian Premier League.

This is the third time in IPL history that the Chennai Super Kings have reached the target on the last ball, the most by any team. Following the Mumbai Indians' six such victories.

Shardul Thakur, CSK's top bowler, and Josh Hazlewood each got two wickets, with one for Ravindra Jadeja.

Ravindra Jadeja named Player of the Match for his match-winning all-round effort, which included a blistering 22 off 8 balls and a wicket for 21 runs in four overs.
Match Highlights