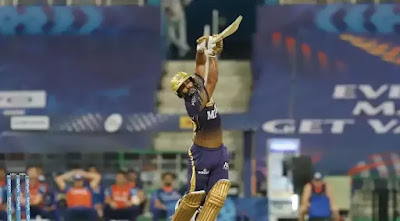 In the 34th match of the Indian Premier League, Kolkata Knight Riders beat Mumbai Indians by a record seven wickets and keep their playoff chances alive thanks to a brilliant bowling effort and blazing half-centuries from Venkatesh Iyer and Rahul Tripathi.

The Kolkata Knight Riders' 29-ball spare was their equal seventh-largest victory in terms of balls left in the Indian Premier League, and it was their greatest win over Mumbai Indians in the IPL, surpassing their previous highest win by 15-ball in Kolkata in 2010.


MI scored 155-6 in 20 overs, with Quinton de Kock leading the way with 55 from 42 balls, including four fours and three sixes.


Venkatesh Iyer hit an unbeaten 53 off 30 balls, including four fours and three sixes, at a strike rate of 176.66, while Shubman Gill hit 13.

Sunil Narine named Player of the Match for his economical bowling effort, which included taking one wicket for 20 runs in four overs.
Match Highlights