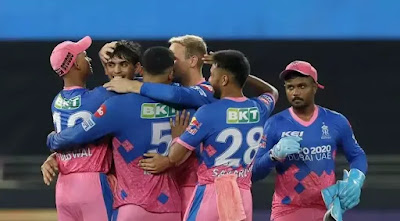 Despite Arshdeep Singh's record-breaking five-for and a 120-run opening stand between KL Rahul and Mayank Agarwal, Rajasthan Royals pulled off a stunning 2-run victory over Kings XI Punjab in a nail-biter game of the 32nd match of the Indian Premier League.

RR scored 185 for all-out in exactly 20 overs, with Yashasvi Jaiswal top-scoring with 49 off 36 balls - one run shy of his half-century - with six fours and two sixes.

KL Rahul smashed 49 off 33 balls, falling one run short of his half-century, with four fours and two sixes and a strike rate of 148.48.