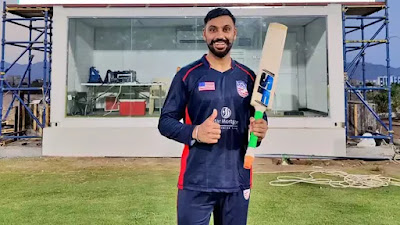 Jaskaran Malhotra's sensational 173*, including a record-equaling six sixes in an over, and Abhishek Paradkar's debut four-for give USA a record 134-run victory against PNG, clinching the two-match series 2-0 sweep in a one-sided historic second ODI.
Match Stats:
The USA's 271 was their second-highest score in one-day internationals, and it was their greatest total against PNG in ODIs, surpassing their previous best of 251 at Lauderhill in 2019.
In one-day internationals, PNG's 137 was their second-lowest score against the United States.
Abhishek Paradkar's 4 for 26 was the best debut bowling figure for The United States in a One-Day International, surpassing Timil Patel's 2 for 34 against the same opponent in Windhoek in 2019.
In 20 overs, the USA scored 271-9, with Jaskaran Malhotra top-scoring with 173 not out, his first ODI century, Aaron Jones 22, Nisarg Patel 20, and Steven Taylor 17.
Chad Soper, Damien Ravu, and Nosaina Pokana each got two wickets, with Charles Amini taking one.
Lega Siaka hit 30 off 29 balls, including three fours and a six, to help PNG reach 137 for all-out in 37.1 overs.
Norman Vanua hit 30 off 26 balls, including three sixes and a four, and Charles Amini hit 17 off 26 balls.
Debutant Abhishek Paradkar was named the best bowler in the USA, taking four wickets for 26 runs in nine overs, including two maidens, in his first ODI encounter.
Steven Taylor, Karima Gore, Nisarg Patel, and Jessy Singh each got one wicket. Saurabh Netravalkar grabbed two wickets.
Jaskaran Malhotra named Player of the Match for his career-best undefeated 173 runs off 124 balls, with 16 sixes and four fours, and a strike rate of 139.51.
Jaskaran Malhotra 6 Sixes Highlights