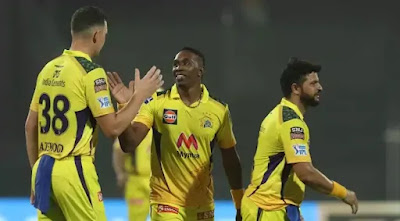 Despite half-centuries from openers Virat Kohli and Devdutt Padikkal, Chennai Super Kings cruise to a six-wicket victory over Royal Challengers Bangalore in the 35th match of the Indian Premier League, thanks to a superb death bowling display from Dwayne Bravo and Shardul Thakur before top-order batsmen.

RCB scored 156-6 in 20 overs, with Devdutt Padikkal top-scoring with 70 off 50 balls, including five fours and three sixes and a strike rate of 140.

Dwayne Bravo named Player of the Match for his outstanding death bowling effort, which saw him take three wickets for 24 runs in four overs.