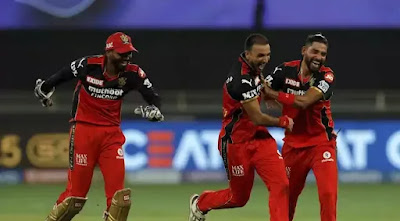 Harshal Patel was the RCB's top bowler, taking 4-wickets for 17 runs in 3.1 overs, Yuzvendra Chahal grabbed 3-wickets for 11 runs in 4-overs, including a maiden, Glenn Maxwell took 2-wickets, and Mohammed Siraj took one.

Glenn Maxwell named Player of the Match for his all-round effort, taking two wickets for 23 runs in four overs after blasting a quick-fire 56 off 37 balls, including six fours and three sixes, with a strike rate of 151.35.
Match Highlights