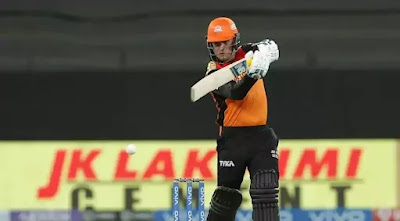 Despite Sanju Samson's 57-ball 82, Sunrisers Hyderabad win by seven wickets with to Jason Roy's flaming fifty and Kane Williamson's unbroken half-century in the 40th match of the Indian Premier League.

Sanju Samson's 82 was his sixth highest score for the Rajasthan Royals in the Indian Premier League and his second highest versus Sunrisers Hyderabad.

Sunrisers Hyderabad's successful run-chase of 165 was their sixth best in the Indian Premier League, and it was their second greatest chase against Rajasthan Royals in the IPL.
Sanju Samson became the IPL's 19th player to achieve 3000 runs.

Yashasvi Jaiswal hit 36 off 23 balls, including five fours and a six, for a strike rate of 156.52, while Mahipal Lomror remained unbeaten on 19.

Mahipal Lomror, Mustafizur Rahman, and Chetan Sakariya each got one wicket for RR.

Jason Roy named Player of the Match for his match-winning blistering 60-run knock-off off 42 balls, including 8 fours and a six with a strike rate of 142.85.
Match Highlights