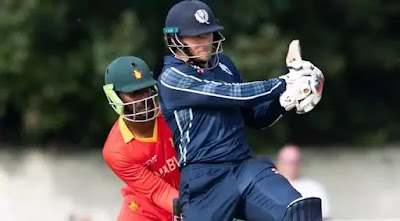 Despite a spirited 45* from Milton Shumba, Richie Berrington's 61-ball 82* and Safyaan Sharif's four-for led Scotland to a close 7-run victory against Zimbabwe and take a 1-0 lead in the opening T20I.
Match Stats:
Scotland scored 141-6 in 20 overs, with Richie Berrington (82 not out), Matthew Cross (14), and Michael Leask (11), among the top scorers.
Tendai Chatara, Zimbabwe's top bowler, and Luke Jongwe each got two wickets, one for Richard Ngarava - Wellington Masakadza.
In 20 overs, Zimbabwe scored 134-9, with Milton Shumba top-scoring with an unbeaten 45 off 30 balls, including five fours and a six at a strike rate of 150, Sean Williams 28, Craig Ervine 26, and Regis Chakabva 17.
Safyaan Sharif, Scotland's finest bowler, grabbed 4-wickets for 24-runs in 4-overs, while Mark Watt, Ollie Hairs, Alasdair Evans, and Chris Sole each took one wicket.
Richie Berrington named Player of the Match for his outstanding batting effort in which he hammered 82 runs off 61 balls with a strike rate of 134.42, including seven fours and three sixes.
Match Highlights