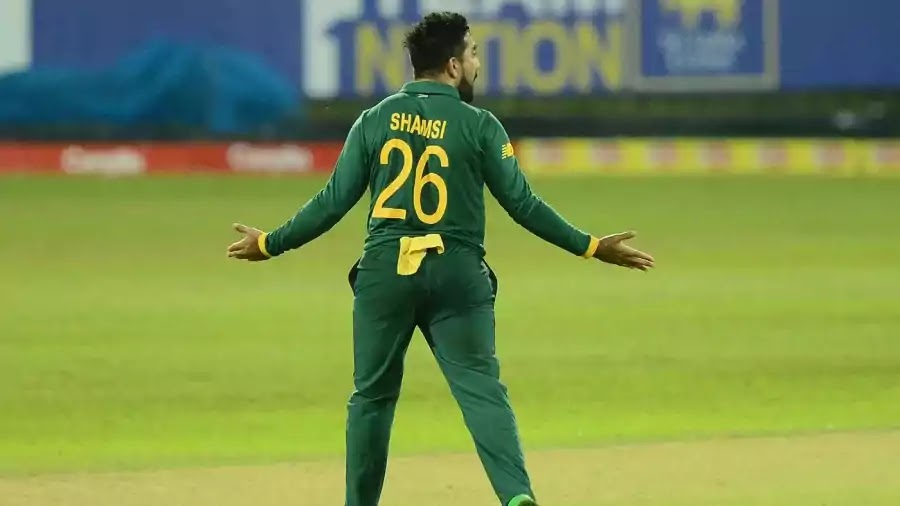 Tabraiz Shamsi struck after the rain break again to finish with a five-for
In a rain-affected game of the second ODI, Janneman Malan's stunning century, Reeza Hendricks' half-century, and Heinrich Klaasen's assault before Tabraiz Shamsi's record, five-for helped South Africa cruised to a 67-run victory against Sri Lanka through DLS system and level the series as 1-1.
Match Stats:
South Africa scored 283-6 in 47 overs (overs were reduced from 50 to 47 due to rain) with Janneman Malan top-scoring with 121 off 135 balls, his third ODI century and first century against Sri Lanka in ODIs.
Heinrich Klaasen struck 43 off 27 balls with 4-fours and a six for a strike rate of 159.25, Reeza Hendricks hit 51 off 54 balls with 5-fours, Mark Markram 21, and Rassie van der Dussen 16.
Dushmantha Chameera and Chamika Karunaratne, Sri Lanka's top bowlers, both grabbed two wickets, with one for Dhananjaya de Silva - Wanindu Hasaranga.
Sri Lanka were all out for 197 in 36.4 overs, with Charith Asalanka top-scoring with a 77 off 69 balls, including five fours and three sixes, and a strike rate of 111.59.
Chamika Karunaratne smashed 36 off 23 balls with a strike rate of 156.52, including two sixes and a four, and Dasun Shanaka hit 30 off 41 balls with two fours.
Tabraiz Shamsi got a career-best 5-wicket haul for 49 runs in 7.4 overs, while Kagiso Rabada, Wiaan Mulder, Keshav Maharaj, and George Linde each grabbed one wicket.
Janneman Malannamed named Player of the Match for scoring 121 runs off 135 balls, including 9 fours and a six.
Match Highlights