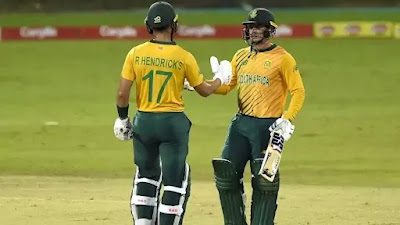 Before the bowlers begin to assault, De Kock and Hendricks score unbeaten half-centuries as South Africa beat Sri Lanka by ten wickets and complete the team's first 3-0 whitewash against Sri Lanka in the third T20I.
Match Stats:
Sri Lanka scored 120-8 in 20 overs , with top scorer Kusal Perera (39 off 33 balls with three fours), Chamika Karunaratne (24 not out), and Dasun Shanaka (18).
Bjorn Fortuin, South Africa's top bowler, and Kagiso Rabada both got two wickets, while Aiden Markram, Wiaan Mulder, and Keshav Maharaj each took one.

South Africa chased down 121-0 in 14.4 overs with Quinton de Kock top-scored with 59 not out, while Reeza Hendricks struck an undefeated 56 off 42 balls, including five fours and a six.
Quinton de Kock named Player of the Match for his match-winning unbeaten 59 from 46 balls, which included seven fours and a strike rate of 128.26.
Match Highlights