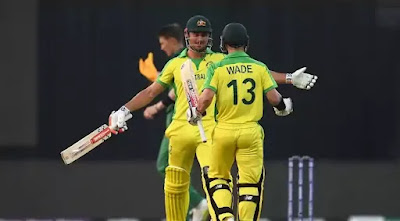 
South Africa's 118 was their tenth lowest T20I score, their fifth-lowest total against Australia in T20Is, and their second-lowest score in the T20 World Cup.


South Africa scored 118-9 in 20 overs, with Aiden Markram top-scoring with 40 off 36 balls, including three fours and a six, Kagiso Rabada 19 not out, and David Miller 16 not out.


Josh Hazlewood named Player of the Match for his speed assault, which claimed two wickets for 19 runs in four overs, including a maiden.
Match Highlights