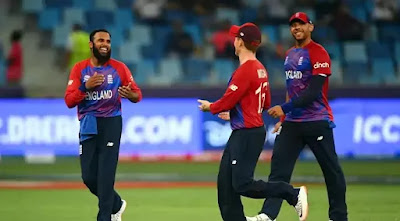 England beat West Indies by six wickets in a low-scoring game in the 14th T20 World Cup match, big kudos to a record-breaking session from spinner Adil Rashid (4 for 2) and two wickets each from Moeen Ali and Tymal Mills.


Adil Rashid's 4 for 2 was the highest bowling figure for England in T20 international cricket history, beating Chris Jordan's previous mark of 4 for 6 against the same opponent at Basseterre in 2019 and the seventh-best bowling figures in T20 World Cup history.


West Indies scored 55 for all-out in 14.2 overs, with Chris Gayle leading the way with 13 and Shimron Hetmyer with 9.


Adil Rashid, England's finest bowler, got 4-wickets for 2-runs in 2.2 overs, while Moeen Ali and Tymal Mills both took 2-wickets and Chris Jordan took one.


Akeal Hossein, the finest bowler for the West Indies, grabbed two wickets and Ravi Rampaul one.


Moeen Ali named Player of the Match for his outstanding spin bowling performance, which included two wickets for 17 runs in four overs, including a maiden.
Match Highlights