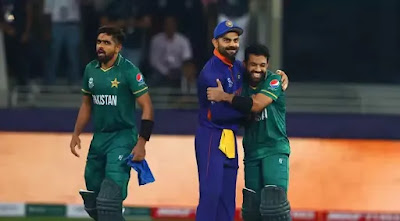 The combined 5-wickets of Shaheen Shah Afridi and Hasan Ali were followed by stunning unbeaten half-centuries from Mohammad Rizwan and Babar Azam, propelling Pakistan to a record ten-wicket win against India in the 16th match of the T20 World Cup.

Rishabh Pant made 39 runs off 30 balls, including two sixes and two fours, while Ravindra Jadeja made 13.

Babar Azam scored an undefeated 68 off 52 balls, including six fours and two sixes.


Shaheen Shah Afridi named Player of the Match for his 3-wickets for 31 runs in 4-overs speed bowling assault.
Match Highlights
Pakistan's ten-wicket victory is the greatest in T20 international cricket history in terms of remaining wickets. It is India's first setback of this magnitude.


Pakistan has snapped a long World Cup losing streak against India, which dates back to 1992.


Pakistan's 152-run chase against India was their best successful run-chase in a T20 international; they had previously chased 134 in Bengaluru in 2012, and it was their third-highest chase in the T20 World Cup.

Mohammad Rizwan's 79* was his sixth greatest T20I score and the highest by a Pakistan batsman against India.

Babar Azam's 68* was his joint seventh-highest T20I score for Pakistan and the second-highest by a Pakistan batsman against India in T20Is.

Mohammad Rizwan and Babar Azam set the highest first-wicket partnership of 152 run for Pakistan against India in T20Is, surpassing the 74-run partnership between Nasir Jamshed and Ahmed Shehzad in Ahmedabad in 2012. It is also Pakistan's second-best any-wicket stand in T20Is.