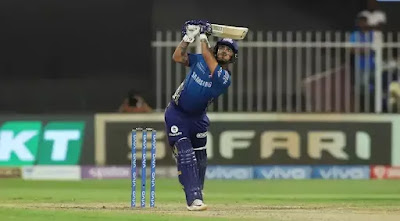 Before, Nathan Coulter-Nile had four wickets and James Neesham had three. In a one-sided game of the 51st edition of the Indian Premier League, Ishan Kishan's unbroken half-century propels Mumbai Indians to a record eight-wicket victory against Rajasthan Royals and keeps their playoff chances alive.


After Hardik Pandya's 20-ball half-century, Ishan Kishan smashed a 25-ball fifty for Mumbai Indians in the Indian Premier League. It was the second quickest fifty by a MI batsman against RR in the IPL.


Mumbai Indians' 70-ball spare was their second-largest victory in the Indian Premier League in terms of balls remaining, and it was also their greatest win over Rajasthan Royals in the IPL, with their previous highest victory by 32-balls in Mumbai in 2014.


Rajasthan Royals' 90 was their third-lowest score in the Indian Premier League, and it was also their lowest total against Mumbai Indians in the IPL; the previous lowest being 103 against Mumbai in the first season of the league in 2008.


Nathan Coulter-Nile named Player of the Match for his fast bowling attack, which took a career-high four wickets for 14 runs in four overs at a 3.50 economy rate.
Match Highlights