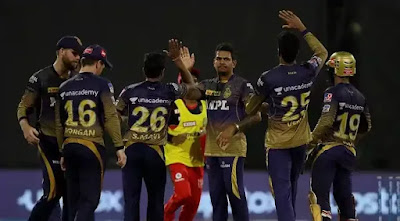 Virat Kohli's career as Royal Challengers Bangalore captain comes to an end with a loss.


Sunil Narine was the top bowler for KKR, with 4-21, and Lockie Ferguson grabbed two wickets for 20 runs in four overs.

Sunil Narine became the first player in IPL history to knock three sixes in the opening three balls of an innings.


Harshal Patel and Dwayne Bravo tied for the most wickets in an IPL season with 32 in the 2013 edition.


Harshal Patel claimed 32 wickets this season, the most by an Indian in an IPL season, breaking Jasprit Bumrah's previous record of 27 wickets set in the previous edition.


Kolkata Knight Riders' chase of 139 against Royal Challengers Bangalore was their sixth most successful run chase in the Indian Premier League.


In the Indian Premier League, Royal Challengers Bangalore's 138 was their sixth-lowest total against Kolkata Knight Riders.


Sunil Narine's 4 for 21 was his sixth best-bowling figure in the Indian Premier League for Kolkata Knight Riders, and his second best bowling statistics against Royal Challengers Bangalore following his 4 for 20 against Kolkata in 2014.


Sunil Narine named Player of the Match for his match-winning spectacular all-round effort in which he blasted 26 off 15 balls, including three sixes, with a strike rate of 173.33, after capturing four wickets for 21 runs in four overs.
Match Highlights