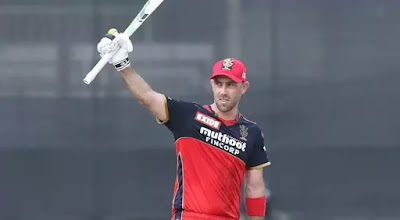 Despite a 91-run opening partnership between KL Rahul and Mayank Agarwal, Royal Challengers Bangalore eventually defeated Punjab Kings by six runs in the 48th edition of the Indian Premier League and RCB made a path to the playoffs for the second successive season in the 48th match of a Indian Premier League.
RCB scored 164-7 in 20 overs, with Glenn Maxwell top-scoring with 57 off 33 balls, including four sixes and three fours and a strike rate of 172.72.


PBKS scored 158-6 in 20 overs, with Mayank Agarwal top-scoring with 57 off 42 balls, including six fours and two sixes.


KL Rahul, Aiden Markram, and Shahrukh Khan all hit 39 runs off 35 balls, including two sixes and a four.

Yuzvendra Chahal, the RCB's top bowler, took three wickets for 29 runs in four overs, while George Garton and Shahbaz Ahmed both took two wickets.
Glenn Maxwell named Player of the match for his incredible 57-runs off facing 33-balls including 4-sixes & 3-fours with a strike rate of 172.72.
Match Highlights