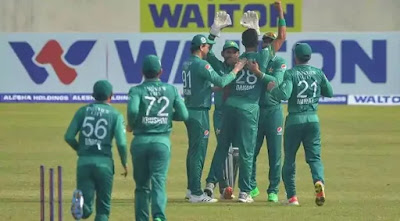 Pakistan whitewash Bangladesh in T20 series
Despite a sensational final over from captain Mahmudullah's three wickets, Pakistan seal a thrilling five-wicket victory over Bangladesh and clinch the three-match series 3-0 whitewash in a low-scoring thriller of the third T20I with forties from Mohammad Rizwan and Haider Ali before Mohammad Nawaz hit a last-ball boundary to seal a thrilling five-wicket victory.


Bangladesh scored 124-7 in 20 overs, with Mohammad Naim top scoring with 47 off 50 balls, including two sixes and two fours.


Pakistan chased down 127-5 in 20 overs, with Haider Ali leading the way with 45 runs, Mohammad Rizwan with 40 off 43 balls, including two fours and a six, and Babar Azam with 19 runs.


Haider Ali awarded Player of the Match after scoring a match-winning 45 from 38 balls, which included three fours and two sixes.

Mohammad Rizwan was named Player of the Series for his 90 runs in the three-match T20I series.
Match Stats: