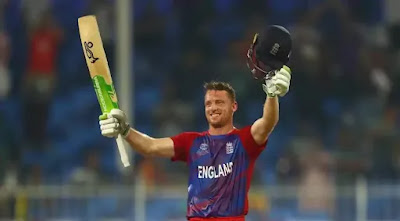 Jos Buttler hit a breathtaking maiden T20I century before bowlers handed England a commanding 26-run victory against Sri Lanka to go to the semi-finals of the T20 World Cup in the 29th match.


England's best bowler was Moeen Ali, who got two wickets, Adil Rashid, who took one, and Chris Woakes, who took one.


Jos Buttler named Player of the Match after scoring a career-high blistering undefeated 101 runs off 67 balls, including six sixes and six fours with a strike rate of 150.74.
England's 26-run victory over Sri Lanka was their second-lowest in terms of runs in T20 internationals, and it was their fourth narrowest win in T20 World Cup.

After Alex Hales, David Malan, and Liam Livingstone, Jos Buttler became the fourth England batsman to reach a century in a T20 international.