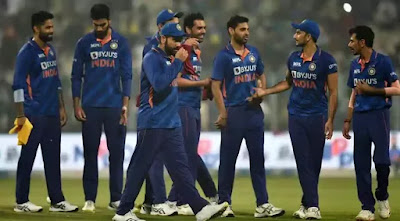 
Deepak Chahar hit an unbeaten 21 from 8 balls with a strike rate of 262.50, including two fours and a six, while Venktesh Iyer made 20 and Harshal Patel made 18.


Axar Patel selected Player of the Match for his stunning spin bowling attack, which saw him take three wickets for nine runs in four overs, a career high.
Match Stats